Tales from times of exhaustion #1 – the initial readjusting

I wish my body collapsing on me would be as intriguing as this house collapsing. But it’s really not. 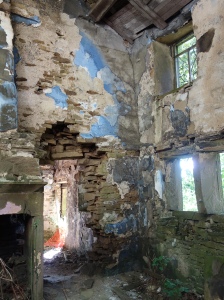 It’s been coming and it’s understandable but it’s still frustrating and depressing. I had hoped to catch it in time and I slowed down but no luck.
I am now trying to settle in to the state of things. Readjust to the current level of tiredness, pain and cognitive limitations.
My days more or less consist of thinking of something I need to do and then forgetting it. This include basic things like eating, drinking, getting dressed or going for a pee… Then remembering it again, try and decide if I am able to do it. I usually have a time frame of 20 min of activity before I will have to rest for X amount of time…
Am still managing to get out of bed every morning which is good. Mainly because the pain means I can’t keep lying down. Silver linings…
I am not able to get outside much which makes me feel sad. Having to do as little as possible and yet just enough to keep me from getting caught in unhelpful thoughts. My main mantra is ‘you’re exhausted and that is understandable’ – cause dealing with my body collapsing also means dealing with all kinds of internalised judgemental crap that I’ve been socialised to think.
Cooking and eating are my main priorities as well as keeping my environment neat so that it doesn’t cause anxiety, overstimulation and panicky episodes.
I am having to rethink my plans for the next months. Simplify, slow down and be sensible. And worst of all ask for help with stuff and rely more on Rufus than I’m comfortable with.
Hopefully this first week will be the worst – I know I can make a difference if I just focus on food, rest and manageable movement and I’ll eventually get out of this absolutely awful sense of being caught in sand. Like when you are dreaming and you want to speak, open your eyes or move and you just can’t no matter how hard you try. Same sense of heavyness and confusion.
Then I’ll just have to wait and see how long it takes to recover to a more acceptable level of limitations…

Find blogs as podcasts on